Street Soccer players will start their journey as a Team England representative in September, we spoke to a former player and coach to learn about their experience.

Team England’s first competition with Street Soccer as its official partner will be next month’s Four Nations Tournament, taking place in Edinburgh on September 18th and 19th.

A player at the 2018 Homeless World Cup and a coach the following year, Tyra highlights her fond memories with Team England’s women’s team.

“Before first playing for Team England, I didn’t know what to expect. I had no idea the Homeless World Cup was such a big event, but I am sort of glad in a way that I was unprepared for that because it allowed me to push myself out there and speak to new people and learn new things. That’s the full experience that I wanted.”

Tyra first heard about the event from a friend Sarah, who played for England in the 2017 Homeless World Cup in Oslo and knew there was something special about the tournament after quizzing her on her arrival back in the UK. Street Soccer’s Jack Badu was influential in Tyra’s selection, after visiting her community college to deliver a session at Arsenal’s Market Road football pitch in early 2017.

“Jack delivered a session for us and explained to the girls about the whole Team England project, it was there and then I decided I wanted to apply. After the application, I was training with the girls at Black Prince Trust Hub every Tuesday and I was picked for the squad for the Mexico tournament in 2018. It was an amazing experience. I am still so close to all the girls who went and it was just a brand new thing for us all, meeting new people from all these different teams. Despite the language barriers, it was just amazing.”

The cultural difference between players is something that players often mention when returning from the international event, however Tyra mentions that this is all part of the learning experience.

“The experience of playing with Team England has helped me come out my comfort zone. It was a real eye opener, learning about new cultures around the world. That’s something I hadn’t really thought about before. The language barriers couldn’t stop us!”

After a successful tournament in Mexico City with Team England, Tyra and her close friend ShakeelaH were identified as ideal candidates to lead the women’s side in Cardiff for the Homeless World Cup in 2019. Tyra believes the support of Street Soccer staff Jack and Craig McManus was key to her personal development in these events.

“Jack managed the Homeless World Cup’s women’s team and his support was outstanding. He helped a lot of us girls to ensure we gave 100%. Craig was always on hand to help us too and hearing his own journey and experience of the tournament really touched a lot of the girls and opened our eyes to see what the tournament can do for people. I feel like the Street Soccer guys give you a lot of preparation and support for events like these. Both mentally and physically. They’re a great support system.”

With Edinburgh just around the corner, Tyra has no doubts that players starting their Team England journey will have a special experience.

“To anyone playing with Street Soccer, don’t think twice about playing with Team England. You won’t regret it. The support you get from the likes of Jack and Craig is amazing. I would say to players to take every opportunity they can. Go and enjoy yourself because it’s the experience that counts. You’ll remember the relationships you build, for life.”

Learn more about Team England, here. More information on the Four Nations tournament will be released later this month. 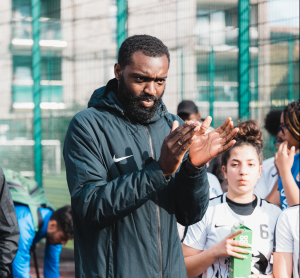